Spring camping in the wilderness

April 26 went to the march to the place of "Platonida", that in the vicinity of Mount Shunut. At first the road was passable, and not bad, but then came the snow cover. Under the snow flow spring rivers. Snow crust does not hold. Rubber boots to walk without simply not possible - feet will be wet. 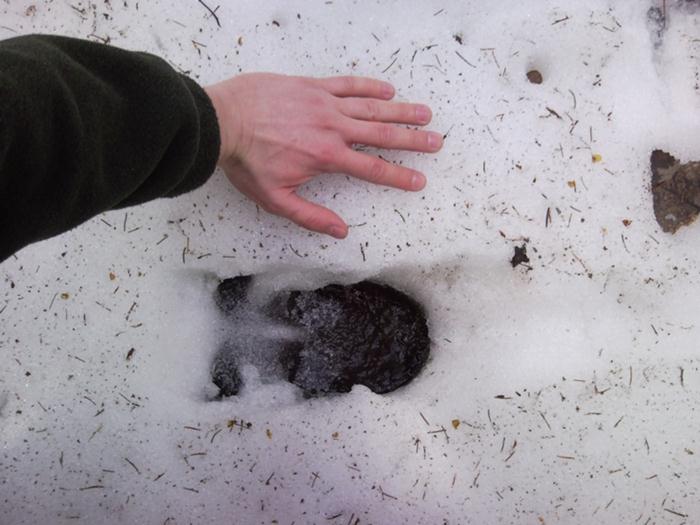 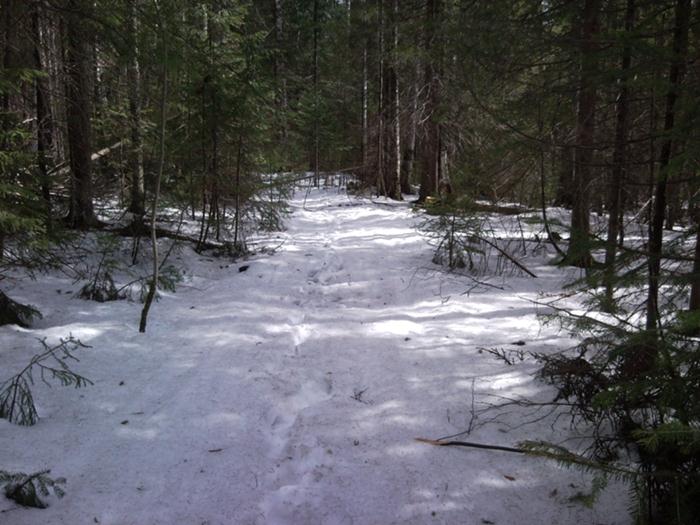 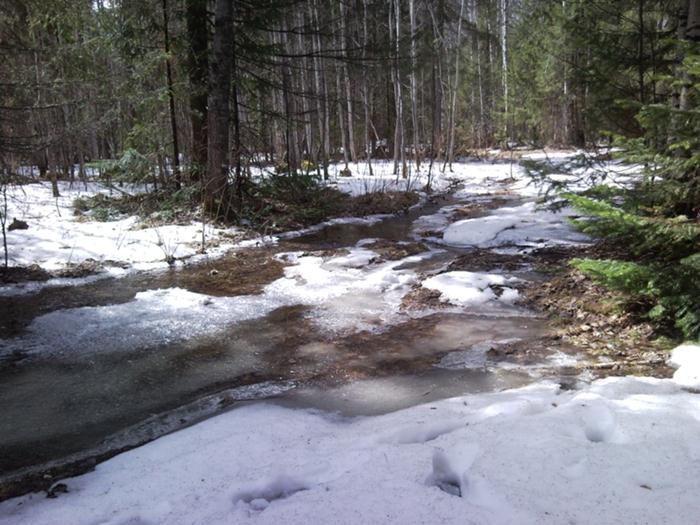 I hard to reached the source. I stopped there on the hill. Built a my shelter, made a fire and stayed the night. 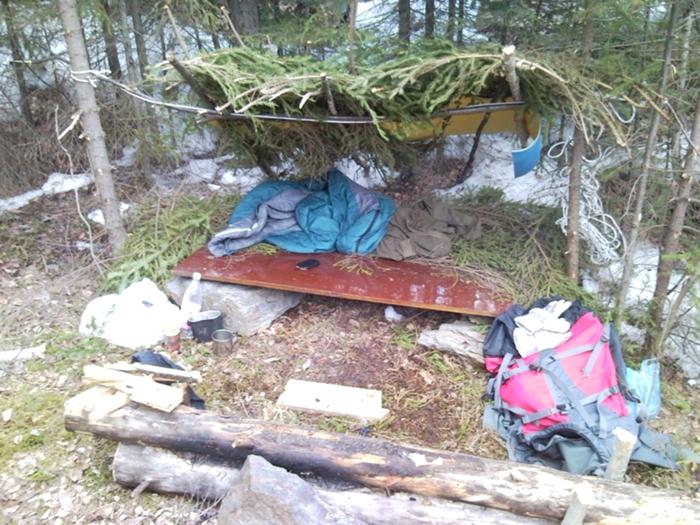 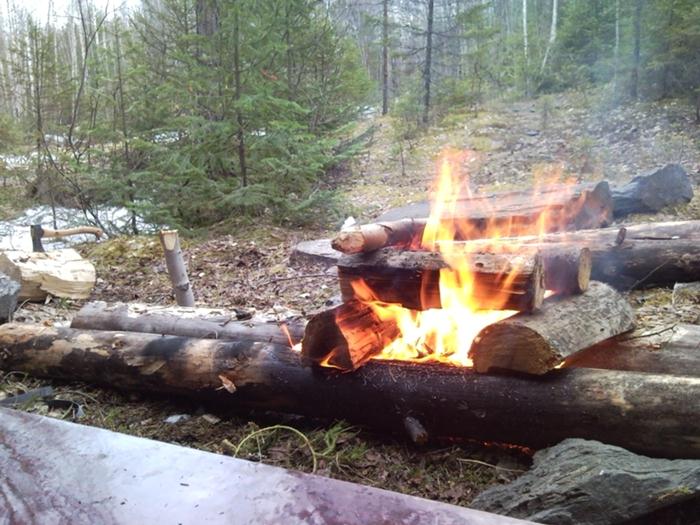 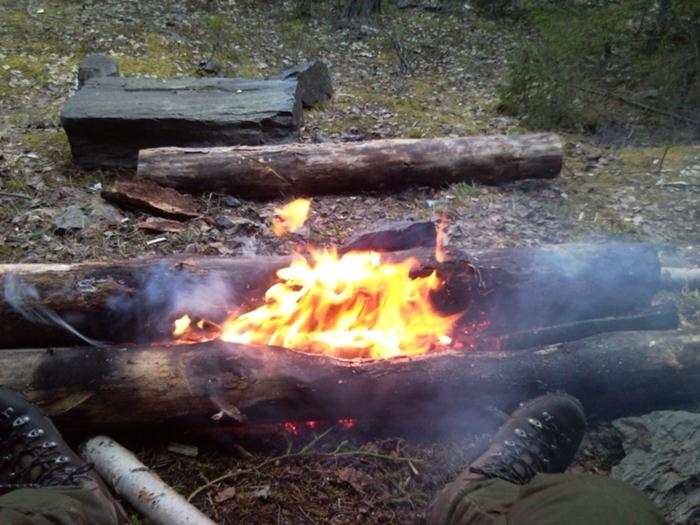 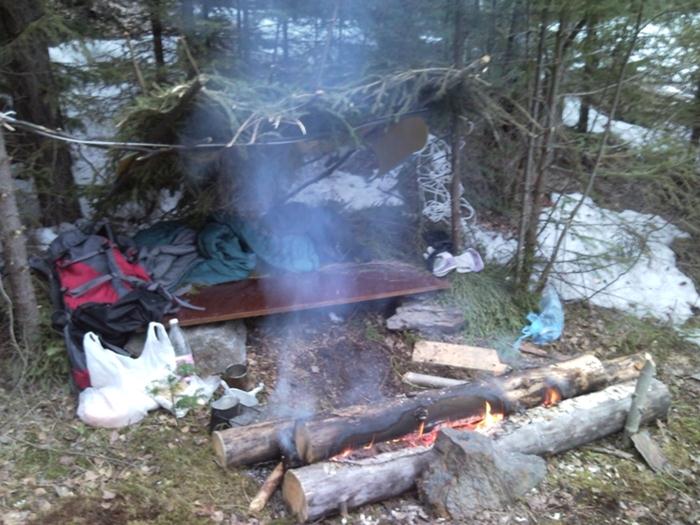 my camping in the wilderness

As for the fire: It is best to burn the fire of the 3 logs. The two lie on the ground, and the third on top of them. But there was another fire - two logs. One on the ground, the other on it, flanked by four pegs do not give to slide down. Such a fire was burning badly, had to clean it up. Throughout the night the fire did not burn, had to wake up and correct him, poking with a stick, a pop-wood. "Nodya" - the best fire for the night. Warms to his full height. The bed should be done at a distance of 40-55 cm from the ground, warm air goes up and warm you will be fine. Also, if there is a need in this, I recommend a good, close all gaps at the bottom of refuge, to lay the moss or fir branches - by the fact that the wind will blow through them, and the heat will go away. You can hang the reflective film on the roof, it will reflect the infrared radiation and thereby increase the heat transfer. The roof is better to use polyethylene. Using the pine wood to be accurate. as they shoot and embers can burn you a thing. It is well lit with fir bark, quickly flashes. Na better night lozhit aspen, it gives a lot of heat and does not shoot. Recommend to install an screen over a fireplace, so that the wind does not blow on it and the smoke did not come to you. 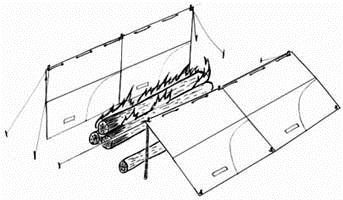 As for the psychological condition: loneliness, cloudy weather, snow, humidity, has borne fruit. The mood was terrible, apathy, did not want to do, even to eat. But I gradually built a fire. One beam, the other, and the fire came. The main thing in these cases than what to do and do not necessarily torture themselves in manual labor, you just need to pay attention to what is, for example, burning a fire, chopping wood, switchgrass to go, but at least that, but would not sit idle. Bonfire raises mood, hot food, a roof over your head - this is the necessary comfort. When lying in the shelter, lit a fire, you're well fed and happy. Wake up what that primitive instincts.

Conclusion: The spring is not the best time for overnight stays or justwalking through the woods. Acquired for himself some kind of experience. One hard. Taiga is much more complicated than it seems and does not forgive mistakes! People who know about all the dangers and difficulties, often simply ignore them, forget, just misunderstood. As long as people will not touch this or that problem - people can not understand it, because there is no personal experience in overcoming this problem. This is especially true of people who are not familiar with the taiga and naively believe that they are omnipotent. I forgot my rubber boots, or rather just not taken, and they really needed me. Or build a bed is too low, the heat went up. We had to build higher, but I didn't know. It all depends on such details. Many people simply forget about all of these domestic difficulties and think about how they meditate, to engage in self-improvement. But you must go through many difficulties.