How to become a better man?

Many of you came to mind the question: How to become a better man? But in order to become a different person, not bad at all would be the first person. Not a member of the order of primates homo sapiens, namely the "Man," whose name can be written with a capital letter, and quoted.

But what does that mean to become man? What is it at all - to be human? What is the actual difference between Homo sapiens, of the order of primates and man, as a higher, spiritual, moral and ethical thing? The difference is that everyone, as a species of primates, there is an animal, mammal, animal. And I, you, oh, dear reader - there are animals, and our bodies - the bodies of animals. In order to become a man, you need to learn how to deal with our animal nature, not rejecting it, since it is natural, but to learn to control and subjugate her to his will, and not subordinate his will, our primal instincts. The man called himself "with a capital" may he who has learned to master his instincts and show them "who's boss."

Let's you turn to our brain. When our ancestors ran through woods, getting their food by hunting, their brain was almost one of the limbic system. Limbic system - this is the most ancient part of the brain, inherited by us, according to paleontologists and evolutionists, even from reptiles. She is responsible for all of our emotions and instincts, for all the feelings that are so actively used the primitive man. It is the limbic system is responsible for all the needs of nature, going to the toilet, eat food, the need for sleep, the need to copulate with the opposite sex in order to conceive a child. Aggression, which occurs during the hazard and human fear. All of these feelings are controlled by one processor, a computer - an ancient brain or limbic system. 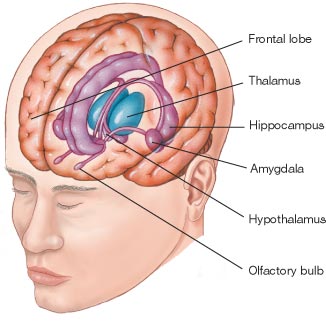 Once a wise man, completely settled into this world, he developed some inventions that made his life easier and easier, he domesticated wild animals, became engaged in farming and animal husbandry, the need for making such difficult decisions gone. The difficulties were of course, without any how, but life in general has become much simpler, easier and more comfortable than it was in earlier ancestors. The process of degradation of the brain, if earlier cortex contrary grew and developed from generation to generation, it is now, due to the fact that it became less and less used - degraded. That is, unused neurons are simply dying, blood vessels that feed them did not work, and gradually stopped bringing these neurons nutrients. So the brain began to decrease in size, the person nebilo already need to have such a big brain. Well, judge for yourself when you have everything, why complicate your life? Absolutely nothing to wrestle on the same problems and more time can be given to rest. Of course it can be given free time and mental development, but we are considering the average person does not geniuses and great thinkers, because such people can only roughly 1% of the total population. One percent of the inventors, people of intellectual labor - they can be ignored, as the resistance of the copper wires. Hence all the rest of the population, average people, and continued to deteriorate, using the inventions of people doing mental work. The man was getting lazier, the brain more and more energy saving, people passed on their genes to offspring.

As a result, humanity once again slipped to the low-lying things where again dominate the beginning of the limbic system. Again started to dictate its will, now developed crust. The man was again only care about their primitive needs. Roughly speaking (and maybe vice versa literally) back to primitive man, he again became primitive. I was amused by some people who are in some conversations with irony say, 'What can we still go back to the primitive? " Duck and so you have him back, guys!

Mankind has become praise the needs of nature, enjoying the pleasure that one derives from the satisfaction of those needs. Filled his belly delicious food - happy! I went to the toilet - satisfied! Had sex - satisfied! and that even for a man want?

Now again there was a cult of the limbic system, then if people cared only meet their needs, and now too. It is much easier to do your needs than to resist them. Many people say, "Think of the heart," but for the frequent because people did not think at all heart, namely the limbic system, ie begin to listen to your instincts. Limbic system, depending on the needs of existing momentum generates and then sends it to the bark, and there is formed idea. For example I want to have or want to sleep or want to mate with the opposite sex. The author of these thoughts is the limbic system. There is not what's wrong with these requirements, they must meet, the issue is that once a person has, on past the limbic system, and even the cerebral cortex, it was thought to be an ancient brain just is not right. So it is probably all the same crust should decide what to do and the person who knows what it wants. Here you do if vdurg wanted the toilet, do not defecate right in middle of the street, or when want to eat, do not take away food from the man, and not just grab it off the counter. So cortex still does not dominate your limbic system, so in these times, you can say about that arrived "on a human being."

It turns out to be a man and as a supreme spiritual being, rather than just an animal - so to be able to resist his instincts. Not that even resist, how to be able to bend them to his will. Your animal nature must obey your human. Your limbic system should be subject to the cerebral cortex. You have to be reasonable, sensible person, not just a primate, whose behavior is based on instinctive and hormonal nuances. Therefore, if we suddenly raises the question: How do I become a different person? Then the answer is simple and at the same time complicated - you just need to become a man. Once we're able to be Humans, the needs and becomes a different person, would not happen again. We will be content with who we are, and who we still managed to become ...